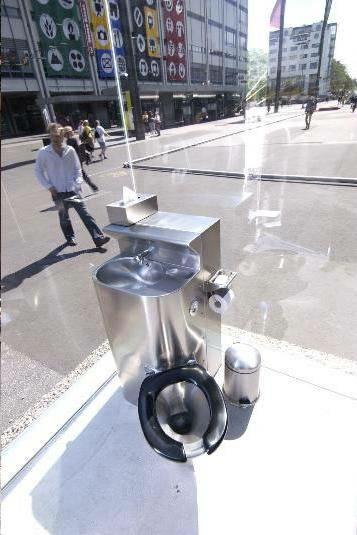 Public Toilet Made of One-Way Glass
Here’s a picture of a public toilet in Switzerland that’s made entirely out of one-way glass. No one can see you in there, but when you are inside, it looks like you’re sitting in a clear glass box. Would you use it?

It’s real. The photograph was taken in Basel, Switzerland in June 2004
the photo shows this transparent glass toilet at the Messeplatz in Basel, Switzerland at a major exhibition centre….The “Don’t Miss a Sec” toilet originally stood on a bustling construction site facing the Tate Britain Museum in London.”

This toilet, called “Don’t Miss a Sec,” first shown in December 2003 by conceptual artist Monica Bonvicini, was immediately called “Loo with a View” by the press.
http://news.bbc.co.uk/1/hi/entertainment/arts/3257370.stm

This site uses Akismet to reduce spam. Learn how your comment data is processed.